The Work Of The Pastor 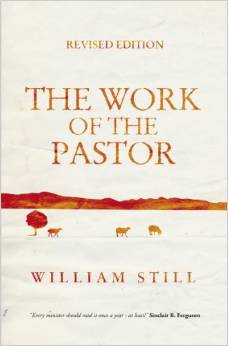 I was sent a copy of this book by Joe Focht, Pastor of Calvary Chapel of Philadelphia. He has been a friend of our family for many years and I am grateful that he sent this book. Written by William Still, it was first published in 1984 and is an easy read. William Still was minister of Gilcomston South Church in Aberdeen, Scotland for over 50 years, from 1945 until shortly before his death in 1997. I can’t say that there was anything earth shattering in it since I’ve had a steady diet on this kind of stuff for many years, through my Pastor, or through the books he’s given me such as all those from A.W. Tozer. What I would say is that this book was refreshing in that William Still repeated the things that have resonated with Bible Teachers for years. The central task of his life, to which he devoted both his love and his energy, was pastoring his congregation. What he stresses in this book is for the Pastor to feed and care for the flock. He has a simple straight forward, no non-sense approach and I appreciate that. If anyone wants to reinforce what it is that is supposed to be happening in the sanctuary, then by all means read this book. It is for leadership and laity, I highly recommend it.